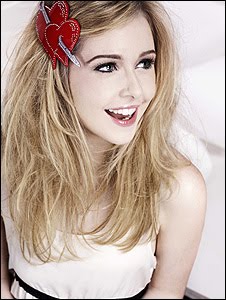 2008 turned out to be a vintage year for the X Factor.
As well as winner Alexandra Burke, the show produced boyband JLS and kooky pop singer Diana Vickers.
Louis Walsh commented that the teenager, from Blackburn, looked like a “little hippy” when she auditioned with Damien Rice’s The Blower’s Daughter.
After contracting laryngitis, however, she finished fourth in the competition – but landed a deal with RCA Records and made a splash in the West End playing the lead role in a revival of musical Little Voice.
Now, she is preparing to release her debut single, Once, and an album that features contributions from Cathy Dennis, Snow Patrol and Ellie Goulding.
The 18-year-old spoke to the BBC about her collaborators, pre-show nerves, and lots and lots of chocolate.

Mark Savage: I noticed on your Twitter page that you eat a lot of chocolate.
Diana: Oh, I’m obsessed! Absolutely obsessed. I ate three easter eggs the other day. I couldn’t wait. And before, I had a piece of cake, a cookie and a chocolate bar. As well as my dinner… and a muffin.

MS: That’s all very impressive – but we’re here to talk about your album… It’s called Songs From The Tainted Cherry Tree. What on earth does that mean?
DV: Basically, “tainted cherry tree” is a lyric from one of the songs that I wrote, The Boy Who Murdered Love. I had this image of a beautiful Cherry Tree, a sort of Adam and Eve thing. It’s beautiful and glistening, and you want to eat it, but it’s all tainted.

MS: There’s a lot of death on the album – the chorus of your new single goes: ‘I’m only going to let you kill me once.’ Are you quite a dark person?
DV: I have my dark days. There are major highs and manic lows. Typical teenager. But I have a lot of things to write about.

MS: So were any of these songs about real-life experiences? Did anyone murder love for you?
DV: At the time, that’s how it feels. You think they’ve destroyed the whole concept of love. But then that all changes when you meet the next man. Love is an amazing but cruel thing. 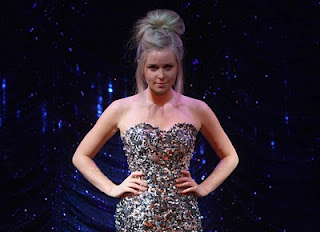 MS: You’ve had a very consistent style and image – right from your first X Factor audition. How hard have you had to fight for that?
DV: I think the minute I walked in on the X Factor with with my freckles galore and that big, floaty dress, they clawed to get hold of me and work with that. They always said I was like a dress-up dolly and I loved being that.

MS: You sang Damien Rice at that audition – but now your music is much more mainstream pop. How did that transition happen?
DV: Now that I’m in the music industry, I’ve explored so many artists. I’m obsessed with Queen now, and the Kings Of Leon. And I’ve gone back to 80s trance, dance – but I’ve also been obsessed with Judy Garland since Little Voice. And then I love putting a bit of Britney on, and I’ve just been to see JLS. I think it’s really good to open yourself up to all kinds of music.

MS: Did you know Ellie Goulding was going to become a household name when you recorded with her?
DV: I had no idea! I remember I was sitting beside her working, and we were chatting away and she started singing and I went – “oh, you sing, too!” And look at her now. She’s on billboards everywhere.

MS: Did any writers turn you down?
DV: [Coyly] No, I worked with everyone I wanted to.

MS: How did you meet Snow Patrol singer Gary Lightbody?
DV: We heard one of his songs and asked for it, then he wrote another one. He just was really generous and sweet. He rings me now to ask how I am.

MS: You’ve sold out your first tour before you’ve ever released a note. That must be pretty daunting.
DV: I’m really nervous, but really excited. I’m going to pass out, I’m that excited.

MS: The X Factor tour must have given you some experience of playing to big crowds.
DV: To an extent, yes, but that was odd. It wasn’t my own music, I only sang three songs, and I was sharing the tour with everybody else. 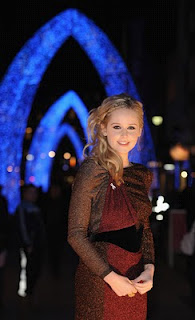 MS: Has your singing changed since you received vocal coaching for Little Voice?
DV: I remember going in to record a vocal for the album while I was doing Little Voice and the producer was like, “Oh my God, Vickers, your voice has grown so much. You’re really singing now.” So there was definitely a distinctive difference. But I didn’t get any Shirley Bassey or Judy Garland on the album!

MS: In the theatre, it felt like your voice was stronger – and you could project better than you ever did on X Factor
DV: I was really well trained. I learnt how crucial your body is – that it does the bulk of the work, not your throat.
But the other thing was, on the X Factor I was petrified. It was like watching Bambi learning how to walk. I was on that stage, and I wanted to be there, and I really wanted to enjoy it, but sometimes it was so hard because I was so little and so nervous. I was always the one being sick in the toilet.

MS: And then you caught laryngitis.
DV: I was ill all the way through that show. When I get run down, my voice is my weak spot.

MS: Entering the X Factor house must be like walking into a greenhouse full of new germs.
DV: It is just like that! You’re surrounded by people you don’t know and it’s a competition, and you’re constantly in the papers, and there are interviewers and crazy psycho fans outside. It’s just
crazy. There’s so much to take – it’s like being in the zoo.

MS: You come across as a very confident, driven person. Where does that come from?
DV: In this business, you’ve got to know what your goal is and be very sure of yourself.
If you’d asked me at the age of seven, ‘what do you want to be when you’re older, Diana?’ I’d have said, ‘I want to be a singer’.

MS: But a lot of seven-year-olds want to be pop stars.
DV: But I knew. People would say, ‘what if it doesn’t work out?’ and I’d reply, ‘it will. It will’. And when X Factor happened, I wasn’t taken aback by it. I said to myself, ‘this is it, this is how it’s meant to be’.

Diana’s single, Once, is out now and her album follows on 3rd May