Meet The Art Rocker Moonlighting On The Men’s Runways 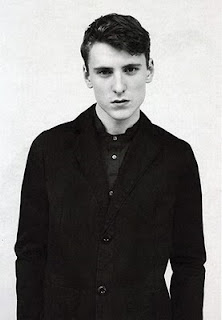 George Barnett’s first modelling job was Hedi Slimane’s last show for Dior Homme in 2007. Since then, his wraith-pale, angular features have made him one of the most recognisable faces in men’s fashion. He’s got the saintly sinner look that appeals to designers like Alber Elbaz and Miuccia Prada. But modeling is moonlighting for him. His heart belongs to These New Puritans – http://www.thesenewpuritans.com – the band he formed with his twin brother Jack, bassist Thomas Hein and keyboard player Sophie Sleigh-Johnson. Though Jack does the writing and singing, it’s George’s drumming that anchors the band’s new album Hidden. It manages to sound complex (George says his hero is that crown prince of the paradiddle, Bill Bruford, once drummer for Yes and King Crimson), tribal and even a little medieval, all at the same time, which is actually a pretty reasonable description for the odd but alluring art rock of the Puritans. Give “Three Thousand,” “Attack Music,” or “Drum Courts – Where Corals Lie” a whirl while you think about George Barnett, living proof that it’s handy to have Something Else to fall back on.