Sport and fashion collide at Models1 with our newest sign, England Rugby pro, Maro Itoje.  At just 24, Itoje has amassed four English Premiership titles and three European Rugby Champions Cups with Saracens, as well as two Six Nations Championships with England. A rising sporting star, as he prepares for the tournament in Japan, Maro is enjoying his last days in London with a few social engagements, one of which being Wimbledon of course. The iconic sporting event is a fashion moment too, with top names pulling out their finest Wimbledon whites for the occasion. Ralph Lauren invited Maro into their Bond Street location for a personal styling and fitting session in preparation for the third round of the tournament. 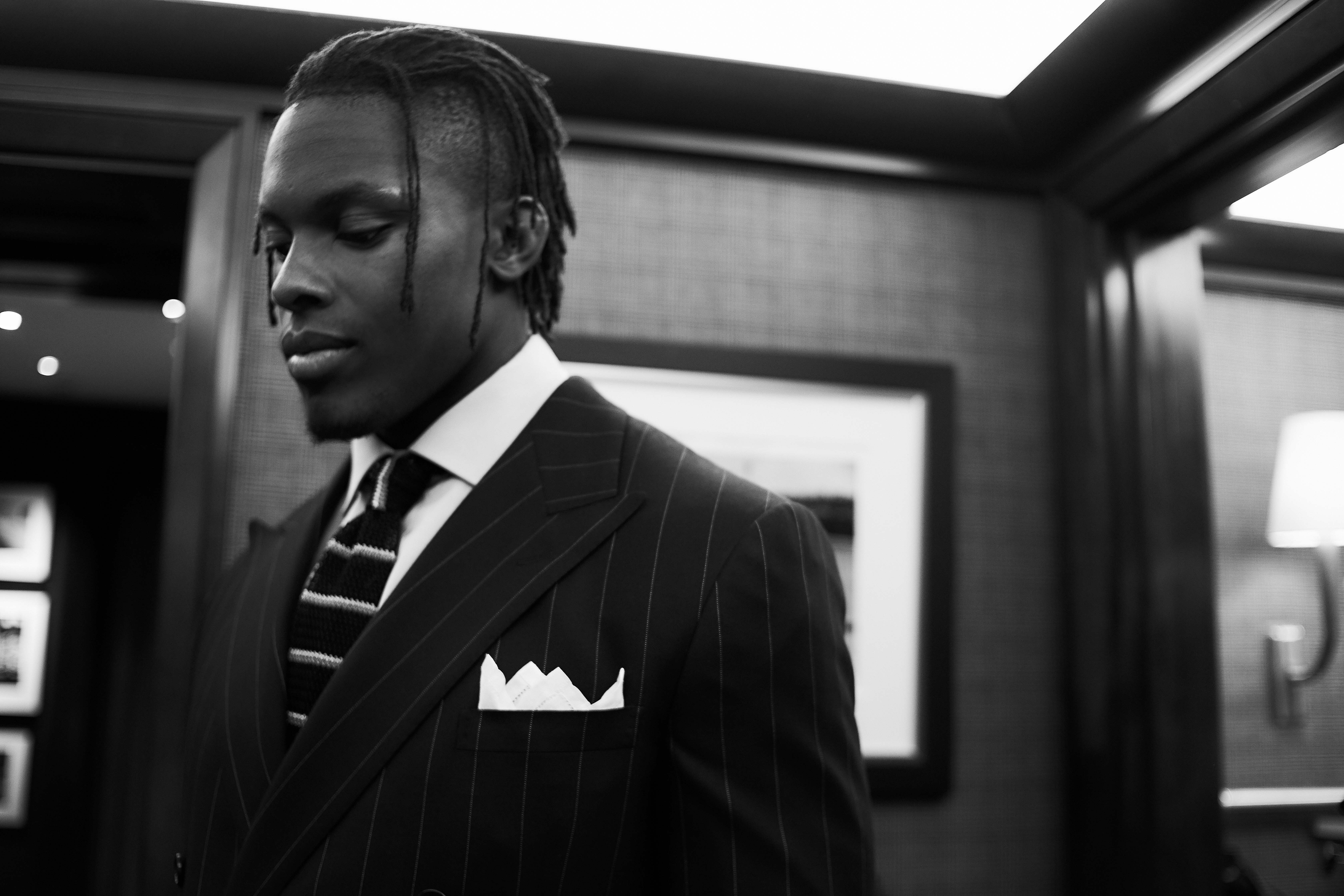 M1: Have you been to Wimbledon before?

MI: Yeah I went to the final last year so this will be my second experience. At the time, I went for a brown blazer and khaki coloured trouser type of look with a light silver-ish tie – so very different from what I’m going for this time around.

M1: When you’re picking out a look for an event, do you tend to reach for something flashy or more traditional?

MI: I think it depends on where I’m going to be honest, but it also depends on my mood. If I’m feeling a little out there – a bit louder. Most of the time I like that simple, classic look.

At 6’5 – it’s hard for Maro to go unnoticed but he’s probably most identified by his free-falling locks. For Wimbledon, he says “That’ll be the decision I make on the day. Whether to tie it back or let it run wild.”

M1: Are you a stripe, polka dots or solids kind of guy?

MI: *Laughs* I’m a lot plainer but I don’t mind stripes from time to time – I’m much more geared towards plain.

M1: What designers are you into at the moment?

MI: Well I’m quite a big fan of Ralph Lauren. Due to my size its quite hard for me to buy things straight off of the shelves and shopping often involves me needing to have things tailored. Ralph have been great in accommodating me here today. I like the classic designers overall.

M1: What’s you’re grooming routine before an event like this?

MI: I’ve had the same barber now for at least seven years – longest relationship I’ve ever had. I go out my way to go to him. Once you have a process – sometimes I don’t even talk I just sit down, and he knows what do to. When I go to Japan, I don’t know what I’m going to do.

M1:Who taught you how to tie a tie?

MI: Pretty much when I was in school – from the age of six or seven, I’ve had to wear a school uniform, so it became a basic essential for me to learn how to tie a tie. I think it was my uncle actually – my Father was living in Nigeria at the time and so my uncle would’ve been the one to teach me how.

M1: Are there any men in you’re life that you take style inspiration from?

MI: Yeah, I’ve got a few to be honest.  A lot of people in my close circle dress well. One of my cousins would love to do what I’m doing right now, he’s very into clothing – smart-wear and dressing proper. He’s always pristine. One of my uncles actually loves a suit as well, he’s always got a tailored suit.

M1: As a rugby player, what are some essential pieces for your wardrobe?

I think its just the fundamentals of formal wear to be honest, so you need to have a proper nice white shirt, nice trousers with black or sometimes brown smart shoes and the accessories to go along with that so ties…cufflinks. All those sorts of things.

M1: You love a polo neck don’t you? We’ve noticed you’ve sporting them from time to time, what draws you to them?

MI: I love the fit, the comfort, the warmth – everything is tight – it’s awesome. I normally mix them with blazer or long trench coats. Im a huge fan. Even when I got here earlier I was king a look around ans saw some things and thought “oh yeah, I’d look good in that” *laughs*

Well suited and excited for Wimbledon, Maro opted for a blue jacket with white trousers and knit tie. A winning look for sure.

Keep up with Maro by following him HERE and stay tuned for more with Models1.