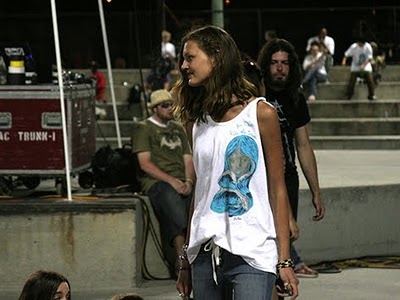 Models saving the world? The cliche sounds more like the plot of a fetching fashion spread or a box office dud than the premise of a real-life event, but on June 8th, it was none other than Elite mannequin–and my own super little sister–Ali Stephens who played the part of the ravishing heroine in a plan to save our seas. The nineteen-year-old hosted Ride the Wave, an event for World Ocean Day, at a local skate park in Salt Lake City, Utah- the hometown where she was scouted in an outdoor mall before being whisked off to a Prada runway just three years ago. At the time she was discovered, Ali was dreaming of a career as a marine biologist, a job in which she could demonstrate her love for the oceans and the creatures that dwell within its depths. So when she found herself on Calvin Klein billboards, in Gap and Zara windows, and in the pages (and on the covers) of major fashion glossies, she had to quit her high school science club and re-examine how she would continue to foster her relationship with Poseidon’s territory. Fast forward to 2010, and she’s now an advocate for Oceana, an organization dedicated to ocean conservation that, along with Elite and Pulse modeling agencies, co-hosted Ride the Wave. Bands from around the Salt Lake valley performed, skaters showed off their moves, and wave-mimicking murals painted by Elaine S. Harding- our aunt and a celebrated Utah artist- were unveiled for the supportive crowd. Guests at the party were encouraged to purchase limited edition tank tops and t-shirts, designed by fashion darling Danny Roberts, the illustrator behind the beloved Igor + Andre blog, with all the proceeds benefiting Oceana. And the affair was such a success that Ali plans to make the party an annual occasion, with ocean-lovers returning to reverse damage on the big blue. In the meantime, the little activist plans to renew her fish-friendly passion by earning a scuba permit and subsequently setting out on some educational sea-faring adventures of her own. Now how’s that for a model citizen?
-Madison Stephens
Article courtesy of Teen Vogue
Contact for Ali is gemma@models1.co.uk