Aynzli Jones today releases his single with hip hop group duo N.A.S. After already supporting Metis as the voice of the Coca-Cola ‘Toe Tappy Story’ commercial there is no doubt that this multi-talented hip hop artist is set to cause quite a stir. When he came in to meet the team we knew we had to grab him for an interview on his music, what he wants from the future & his previous crimes against fashion.

& keep up to date with Aynzli on his twitter: @aynzli 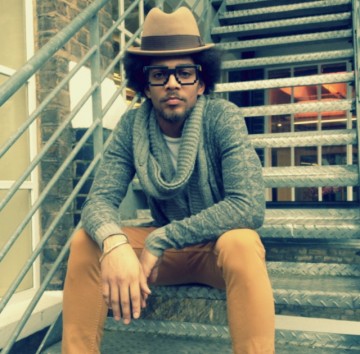 You are a man of many talents; explain the areas you are creating great success in at the moment?

I consider myself a singer, rapper, producer & model. Which I think all unite together to complement one another.

How would you describe your music & musical influence?

Somewhat soul like, I think that coming from my background, of being a rapper first, that my influence is somewhat punchier then say if I had come from a purely singer background.

You supported the incredibly talented Ziggy Marley on tour in 2007- Did you he offer you any important advice or help nurture your growth while you were still starting out?

He was a great inspiration to me all the way through. For me it was amazing to be on tour with him as I grew up in Jamaica beside the Marley’s house. I used to hear Ziggy & Damian Marley rehearsing. So to then be on stage rehearsing with them & then supporting them was just a really humbling experience. Damien Marley is a massive trooper, he taught me about integrity for sure!

Your album will be released by N.A.S.A, not the space cooperation but the musical collective. Explain what N.A.S.A embodies?

N.A.S.A. is two producers, Dj Zagon from Brazil & Squeaky Clean from LA. N.A.SA cleverly stands for North America and South America. Squeaky Clean was a producer that I worked with on my first album when I was with Universal and we have stayed friends ever since. He has gone from strength to strength and on his last album he collaborated with Kanye, Santigold & George Clinton and then he reached out to me last year and I was over the moon to be back in the studio with him.  We worked on a lot of the album together & now I have ended up playing a major part in the album.

How do you think music & style are connected & influenced by one another?

You are no beginner to the fashion world. Explain your history with fashion & the brands you have worked with?

I have had some really amazing experiences with fashion & worked in a bunch of campaigns. I have always loved fashion, since I was small. The first thing I wanted to be was a fashion designer but as I grew older that changed. I have always had a big thing for shoes, I love shoes. In the past I have worked with Bench, Tommy Hilfiger & most recently I shot the Adidas Originals campaign which is out soon. Watch out for that!

Who are your style icons?

When I was growing up in Jamaica my style icons weren’t people that you would necessarily have heard of. They were the people around me; there is an incredible sense of personal style in Caribbean. Have you heard of the musician ‘Elephant Man?’ – He was a great influence. I loved the bright, light colours of the style in Jamaica, it’s very positive.

While growing up did you make any serious fashion mistakes, the teens are normal a guilty period for this?

Oh I had this bad moment when I was about 10 or so in Jamaica. I loved my shoes, so I had pairs & pairs of them and that’s what I changed about my outfits then, not my clothes. I had this one ‘party suit’ that I always wore & one day I was at a party and I remember there was this girl there. I walked in feeling so fresh & I remember she said ‘Aynzli always wears the same clothes every time.’ After that everything changed I realised I couldn’t get away with one outfit forever & started to branch out in a big way and this is where my love for clothes came from.

Where do you like to usually buy in London & who are your favourite designers?

Usually is a bad word. I don’t usually buy anywhere because I like finding the back alleys, the little shops & the random buys. The same applies to designers. There is nothing usual about the way I shop, it’s sporadic. When I see something I like it & I buy it.

What would you like to see for your future- in all elements of music & fashion?

I would love to collaborate with some brands on designing and I have a music label called Future Vintage too so I can see something coming from that. In music, just to be successful, be known & appreciated & to just get better.