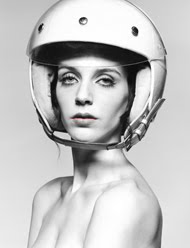 Hannelore Knuts’ new exhibition “UltraMegaLore” is now open in Hasselt/Belgium. Here she speaks to the New York Times about it.

To non-Belgians, the small Flemish town of Hasselt might be best known for hosting the Junior Eurovision song contest in 2005. Clearly, a mecca of taste this isn’t. But that is about to change as the Hasselt Fashion Museum unveils “UltraMegaLore,” a show devoted to über-mannequin Hannelore Knuts. The gambit? Knuts isn’t just the exhibit’s main subject but also its chief curator.

For more than a decade, the 32-year-old has been a distinct presence on runways and magazines with her vampy, androgynous look, an alluring mix of Greta Garbo, Annie Lennox and Robocop. That face, paired with the body of an unusually shapely athlete (Knuts has breasts), made her a favorite of fashion’s biggest names, including Jean Paul Gaultier and Steven Meisel, who booked her for three consecutive Italian Vogue covers in 2000.

To celebrate her career, Hasselt handed Knuts the keys to an empty museum and gave her carte blanche to fill its three floors any way her model brain desired. Her response was to redirect the attention from herself to the people who have formed her personally and professionally — photographers, designers, painters, musicians and even a poet ex-boyfriend. Knuts started planning her anti-retrospective more than a year ago and was recently on-site putting the final touches before last Friday’s opening party. She took a rare break to talk about her experience curating “UltraMegaLore,” touching on several colors and how everyone from Azzedine Alaïa to Mama Knuts got on board. 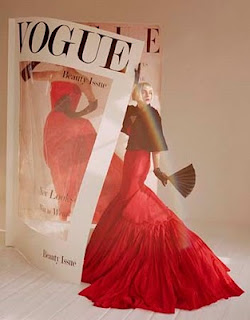 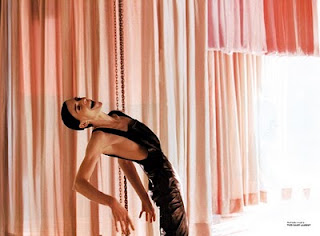 NYT: You’ve been sequestered at the museum for weeks now installing the show. What has that been like?

Hannelore: It has been an emotional roller-coaster ride. You have an idea in your head of where and how you want to put things, a blueprint of the exhibit, but you don’t really know if it’s a good idea until it’s actually in place. We’re a small team on a tiny budget. For instance, I dedicated one room of the show to Gaultier and decided to paint it with horizontal stripes like the ones he uses on his sailor sweaters. So I briefed the painters on the exact width of white and blue to use. When I came back a few hours later, I realized those measurements were totally wrong — there weren’t enough blue stripes, so it looked more like an Adidas room. I panicked; there wasn’t enough time to repaint it because Gaultier’s people were coming the next day from Paris with the beautiful haute couture pieces he’s lending me for the show. So we just added some more blue lines in between. And guess what? They loved it so much that they decided to go back to Paris and lend me more dresses. 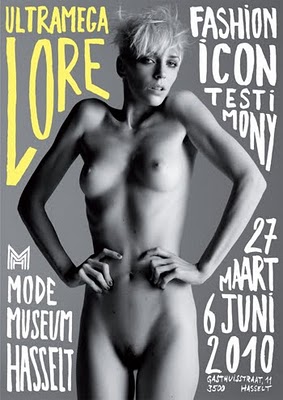 T: Yellow is the show’s thematic color. Why is that color so important to you?
H: After I moved to New York in 2008, I was having doubts about whether it had been the right decision to leave Europe, where I was pretty established. One day I sat on a plane next to an old lady. We started talking, and I was amazed by how much she seemed to know about me. She said, “Hannelore, stop panicking. You made a very big change, and it was the right decision. Just remember to work hard and wear yellow and things will work out.” I thought, Really? But that’s such an ugly color! Still, the next day I went to Topshop, bought something yellow and started wearing it. It sounds silly, but suddenly things started working out. For instance, two weeks later Juergen Teller answered my e-mail about being in my museum show. Now he, too, has his own room, with 16 prints from a shoot he did of me for Self Service.

NYT: Do you think you might curate an art show again?
H: Yes. There’s been days when I cried from stress and anxiety, because the world is watching and I want this to be really good. But I would do it again. Also because you have to kill your darlings. Some things I really wanted to have in the show were impossible, most of the times due to budget limitations. But saying no to one thing led to other, equally good things that I hadn’t thought of.

NYT: You enlisted your mom to work on the show. What was her role?
H: My mom, Christiane, built all the mock-ups, so when the museum was empty and ready for us to move in and start working on the real thing, everything already existed in my mind and in miniature form.

NYT: There’s a public perception of you based on your look. Do you think there’s a side of you people are going to see in the show that is unexpected?
H: Definitely. People see me as this strong, powerful woman, which I do think I am. But I am also a very happy, positive girl that laughs a lot. And I think the show reflects that; there’s a sense of humor and lots of light. I think that’s going to come as a surprise: it’s not as dark as people might expect it to be because they think I’m all rock ‘n’ roll, black-wearing and tough. This show is a very serious thing to me, but it’s also innocent and fun. I am hoping a little kid will enjoy it just as much as a sophisticated grown-up. 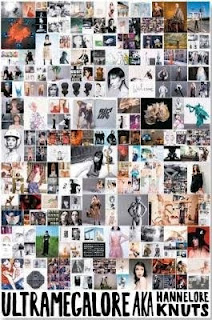