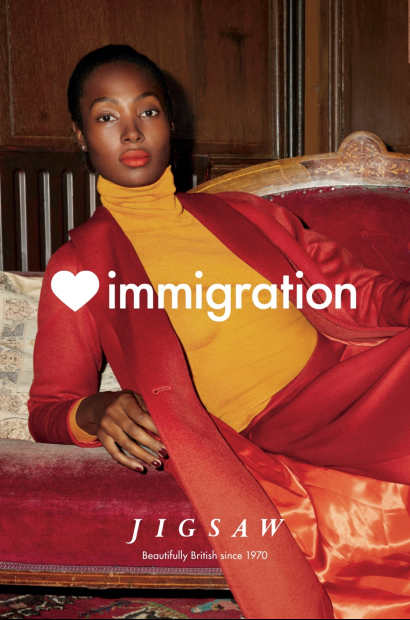 With one of our girls Gabriella Riggon-Allen facing the campaign, we took the opportunity to speak with her and Jigsaw’s Group Head of Marketing Alex Kelly, about the impacts of immigration and multiculturalism on the fashion industry.

1.The campaign states that Jigsaw is “beautifully British”, what does that mean to you?

A: In the context of the campaign it means that being British means that you have been influenced by many different cultures. It means that you can be first or second generation British and be more British than the person whose family have been here for 200 years. It is great to identify as ‘British’ and to have a strong sense of pride in this but if you go back far enough in our ancestry we are all immigrants. As part of this campaign we worked with Ancestry.co.uk to understand this more, we even took the tests ourselves to understand our rich heritages. Even our CEO

2. The campaigns styling featured some classically British motifs like Grandfather chairs and portraiture, offset by quirkier props like pineapples. What is it that you hope the imagery of the campaign conveys to those that view it?

A: It was important that we created a fashion image to reinforce that this was our view as a fashion brand and that it related to the way we did business. We wanted to contrast the traditional ‘British’ environment with beautifully diverse models and bright clothing (also ‘immigrants’ as these were produced in 16 different countries by the 45 different nationalities that Jigsaw employs) adding vibrancy to this setting. We wanted the imagery to be uplifting, unexpected and celebratory. And yes pineapples for a bit of fun and quirk and to show another example of immigration.

3. What effect do you think Brexit will have on the sense of community in the fashion world?

G: Without the input of different cultures, designers, materials etc. there would be no fashion! I think Jigsaw in this A/W IMMIGRATION Campaign have portrayed that beautifully. To me fashion has never been predominantly “one culture” it’s always been something that is shared.

A: We expected the fashion industry to get behind this message as a global industry that has broad cultural influences. But the response has exceeded our expectations, we have had many personal emails of praise from fashion press and fashion insiders and the resulting coverage has been very positive. And so it should be! The message is very simple really. We are not telling people how to vote or to support BREXIT or remain we are simply saying that immigration has contributed to wonderfully diverse and vibrant country. We could have had a campaign that said ♥ diversity but it wouldn’t have had the same impact. For some reason the word immigration has been demonised and that is wrong.

4. How has the Brexit decision impacted Jigsaw and the decisions Jigsaw has made creatively?

A: The campaign was not a response to BREXIT but it was a response to some of the views and attitudes that we have seen arise as a result of the political debate. The BREXIT debate is so complex that you cannot distil it down to just immigration. Although it was a major point of discussion and we wanted to talk about immigration and its impact on us a clothing brand. We felt that there weren’t any brands that were bold enough to have a real point of view on immigration and that none was standing up to point out the debt that we owed to immigration and how it had enriched our British culture and our own collections.

5. What images spring to mind when you think of multiculturalism in Britain?

G: Multiculturalism in fashion is slowly getting there in Europe. In America, advertisements, magazine and so fourth, have such a huge diversity especially with well known that are known to all worldwide. But when these same advertisements are shown in the UK/Europe. It is not shown. The world is not just “black and white” it’s more than that and should be embraced globally.

6. How does Jigsaw intend to convey an image of inclusivity and diversity post-Brexit?

A: We will continue to do what we do. We will work across the globe with the best factories that we can find to produce collections that take inspiration each season from a different cultures, people and ideas. These collections will be designed, created, delivered and sold by 45 different nationalities. And we are proud that this still makes us Beautifully British.
Please join in the debate around what Beautifully British means @InsideJigsaw #HeartImmigration and help celebrate our rich and diverse British culture.