Ben Waters is the boy that has just exploded onto the fashion scene. His first season in Paris saw him open Comme Des Garcons and Kolor, as well as walking for Lanvin, Dries Van Noten and Ann Demeulemeester. The Central Saint Martins student looks set to become big both on and off the catwalk. Watch this space.

Who was your favourite designer to walk for?

I would say Comme Des Garcons.  I was really excited to open that show, and we did four looks each as she didn’t chose many people. It really interests me the way Rei Kauakubo works. This collection she’s just done is very obscure, like overly feminine. It’s not so much about looking cool and chic, the clothes are more like art pieces.

What is your top fashion week tip?

Just to take everything as it comes. 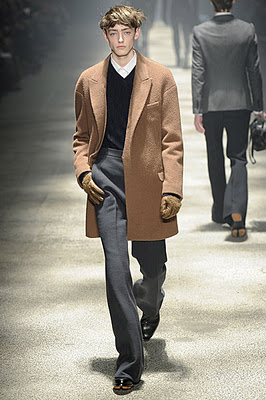 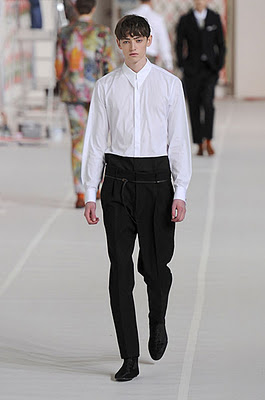 What was on your playlist and reading list for the week?

I only listened to one album the whole time, I don’t know how cool it is but is was Roisin murphy’s Overpowered album. It’s very poppy which isn’t always what I listen to but it’s got something sexy about it, something to keep you going. I’m reading Evelyn Waugh at the moment, he writes about the high society of the 1920s-30s.

Did you get to experience any local cuisine whilst away?

No! Not at all, I really didn’t have the time. But I did find one thing that was amazing that I didn’t even know existed. I love anything with almonds in it, and I went into this shop and they had almond pain au chocolat’s, they were amazing!

How do you think being able to participate in fashion week will affect your own work?

One of the reasons I chose women’s wear was that I didn’t want to be too influenced by shows I watched, I wanted to separate clothes I like to my design work, and to not allow myself to be influenced too much by the shows.  So it doesn’t directly influence my work, but it’s nice to wear clothes that make you feel great, it’s just unfortunate you only get to wear them for 20 minutes!

How would you describe your style?

I mostly wear black. What always gets me to spend too much money is when something fits really well and flatters you. That’s the most important thing.

Who is your favourite designer?

I really like Jil Sander. They are all about cut, and keep it simple whilst always creating something new. For example they’ll make a whole collection out of black leather, it was really simple but with a twist.

So now you’re back in London, what’s your plan?

I’m just going to be studying, and then maybe do some shoots that come along.

What an amazing first Fashion Week! How did you find it?

Well the casting week was pretty crazy. That was in Milan, and it was a good experience because you learn to get around quickly. I found it all exciting because I’m studying fashion design at St. Martins so most of the designers, and it was great not just to be walking but to be involved with the whole thing.