How did you first get signed/ signed as a model?

I won the models 1 UK model scout on STARNOW

What was the initial process?

A little chat of what it was going to be like, popping into the agency a few times, getting some pictures done and starting with the test shoots

What do you wear to castings?

Whatever really. Something where you can tell the shape of my body and I fancy wearing

What sorts of jobs do you look forward to the most?

The short, fun and well paid ones

Not too sure. I guess the biggest team (rather fashion army) was for the Monsters inc editorial for LOVE magazine 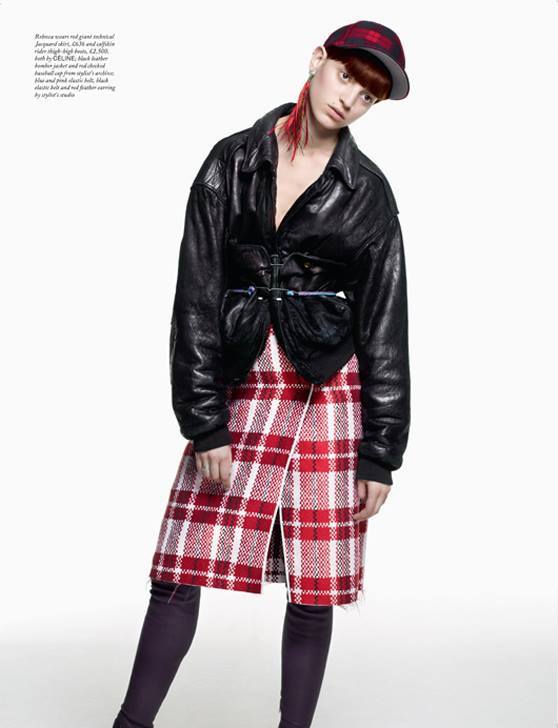 How does an average day/ week plan out for you now?

I rush around on bike to castings/ jobs, generally 5 mins late for anything but nobody seems to care,  and as soon as I get a min to sit down anywhere I read whatever I have to be reading at the moment. By 6pm I check in to the agency and get sent loads of texts, which are hard to keep an overview on with a blackberry whose rollin-up-and-down-thingy doesn’t work properly. So no routine but very busy. Oh I also eat every 3.5 hours on average and sleep between 6 and 9 hours. Every now and then I come into the agency either for casting, which is nice because you get to catch up with some of the other girls, or to get some polaroids done. And if there hasn’t been a reason for you to go in in a couple of weeks they will ask to see you and check if your not suffering of any degenerative disease yet. It’s like having a second mother but your pocket money is nicer.

Do you think that personality plays a key role in being a model?

Yes definitely. Photographers want to shoot a person generally, not a doll. Though I guess there are people and tastes for everything…

When you are given a brief for a shoot- how do you get into that role?

I listen, and I apply. It’s like acting but easier cause you don’t need to talk, just.. feel? I’m not too sure. Mood boards are very useful

How do you keep healthy & in shape?

I eat an alkaline diet, do sport every single day and meditate as much as I can. I’m also 20 so my outer appearance isn’t really an issue…

Best part about being a model?

Money, sometimes the freebies and food and apparently but I haven’t had the pleasure yet, traveling

What do you think makes a successful model?

It’s like any job, you have to do it as a task and not an ego cabaret hobby. You need to interact with your team and just know yourself and be comfortable with yourself. Also you can’t take things personally

How would you describe your model/ booker relationship?

It’s great. Sometimes the person I talk to most in a day (which is not particularly something I’m proud of but it’s nice). Also you end up feeling like is the one person to call when you are stuck somewhere between stress and time. I have to hold myself back from calling when I am struggling with uni. I wish she could help me there too, that be ace